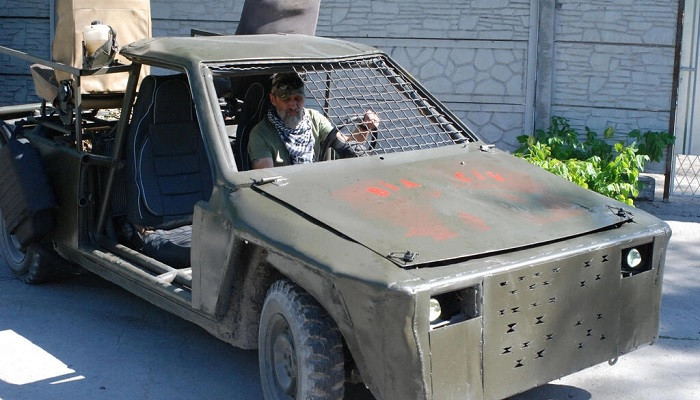 At a workshop in Zaporizhzhia in southern Ukraine, mechanics are hard at work turning rally cars into vehicles that can be used to fight Russian troops on the frontline.

They change mufflers, remove sports tuning, and change the interiors to create pared-down vehicles — all under the supervision of businessman Volodymyr Tarkhov.

Before the Russian invasion, the 32-year-old produced fibre glass catamarans and kayaks.

Since the start of the war, Tarkhov said he and his friends have converted around 30 ordinary passenger cars for the military.

Now they are completing work on a “combat buggy” with the engine from a Russian Lada model used by Ukrainian rally drivers — their second such conversion.

They took out doors, made it quieter and added a large hole at the front through which to shoot with a machine gun.

“The goal is to make the car a little quieter to be able to pass by and stay invisible,” he said.

In the early days of the Russian invasion, the mechanics were busy building anti-tank obstacles and installing concrete blocks to protect the entry points to the city.

Their car conversion is sponsored by local businessmen who buy metal and car parts.

“In general we are just making the car comfortable for soldiers to sit in it or get out,” said Yevgen, 45, whose role is to strip out the car to prepare it for welding.

He said the soldiers who have been using the other buggy the team produced have said it is “very fast and easily manoeuvrable”.

“It is very useful in intelligence and military missions,” he said.

One of the soldiers who had come to inspect the car, a 50-year-old with the callsign “Mamai”, said there were not enough cars for soldiers operating on the frontline.

He said many vehicles brought to the frontline were being sourced by volunteers.

“Jeeps and minibuses are needed at the frontline to move lots of people”.

For “Mamai”, the advantage of the “combat buggy” was that all the passengers could shoot on all sides of the car.

“We will take the car today and take it to our positions,” he said.