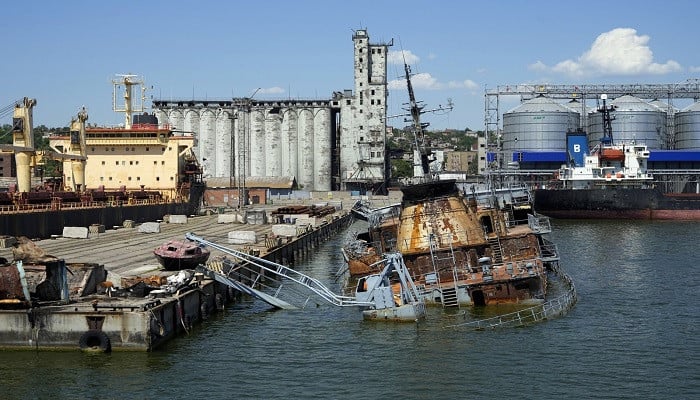 ISTANBUL: A Turkish cargo ship on Wednesday left Ukraine’s Russian-occupied port of Mariupol after a round of “constructive” grain talks with Moscow, Turkey’s defence ministry said, without specifying if it was carrying wheat.

“The meeting in Moscow gave its first concrete result,” the Turkish ministry said in a statement.

“Just a few hours after the end of the long meeting, the Turkish dry cargo ship, which had been waiting for days, left the Ukrainian port.”

The statement added that the Azov Concord became the first foreign ship to leave the port in Mariupol — a city devastated by a weeks-long siege Ukrainian officials estimate claimed 20,000 lives — since Russia’s invasion in February.

Turkey has been spearheading efforts to resume grain deliveries across the Black Sea that have been stalled by minefields and a Russian military blockade of Ukrainian ports.

The meeting between Turkish generals and their Russian counterparts in Moscow reached “an understanding for future negotiations between Turkey, Russia, Ukraine, and the UN,” the Turkish statement said.

“In this context, it was decided that a four-way meeting should be held in Turkey in the coming weeks, after a meeting with the Ukrainian side and the UN,” said the defence ministry.

Turkish media had earlier reported that the four-way grain talks would be held in Istanbul next week.

Moscow denies blocking the passage of cargo ships loaded with Ukrainian grain and blames Western sanctions against Russia for contributing to the food crisis.

A Russian defence ministry statement about the meeting noted no discernible progress.

“The parties discussed the safe exit of Turkish merchant ships and the export of grain from Ukrainian ports, as well as approaches to ensuring safe navigation in the Black Sea,” the Russian statement said.

Millions of tonnes of wheat and other grains are currently stuck in Ukrainian and Russian-occupied ports.

The crisis has seen food prices soar and contributed to the global spike in inflation.

The United Nations warns that it is affecting poorer African countries the most because of their heavy dependence on Russian and Ukrainian wheat.