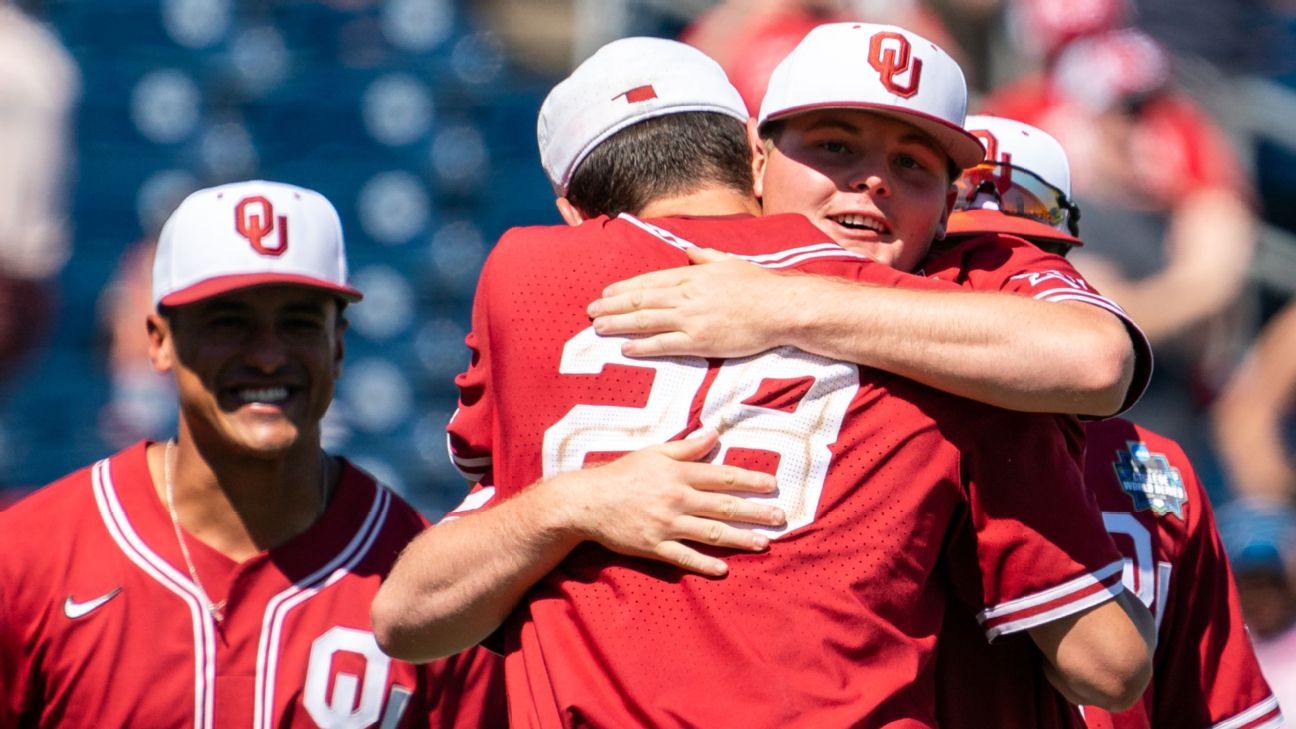 OMAHA, Neb. — Oklahoma’s baseball players came to the Men’s College World Series calling themselves “a bunch of Davids,” a nod to their embrace of the underdog identity they adopted after an underwhelming start to the season.

It was one David — David Sandlin — who got most of the credit Wednesday for taking down Texas A&M, the last of the national seeds in the NCAA Tournament.

Sandlin held the Aggies to one run and struck out a career-high 12 in seven innings, Jimmy Crooks’ three-run homer in the first held up and Oklahoma advanced to the MCWS finals with a 5-1 victory.

Trying to complete a softball-baseball title sweep, the Sooners (45-22) have won three straight games at Charles Schwab Field by no fewer than four runs and will play for their first national championship since 1994.

Their opponent in the best-of-three finals starting Saturday will be either Arkansas or Mississippi. Those two teams were to meet Wednesday night, with Ole Miss needing one win to advance and Arkansas needing two.

As Sooners fans chanted “O-U! O-U!” closer Trevin Michael struck out Brett Minnich to end the game against the Aggies. The celebration was subdued.

“I think those kids are focused,” coach Skip Johnson said. “I don’t know if it’s dog-piling or whatever it is… It’s kind of weird sometimes. I don’t tell them not to dog-pile, I can tell you that.”

Texas A&M (44-20) finished 2-2 in the MCWS under first-year coach Jim Schlossnagle after going 29-27, winning only nine Southeastern Conference games and not even qualifying for the league tournament in 2021.

The Sooners didn’t look like an NCAA tournament team after losing two of their first three Big 12 series and starting 18-12. They’ve won 27 of 37, including 12 of 14 since the end of the regular season.

Sandlin, in his first season with the Sooners after transferring from a junior college, had pitched one-third of an inning of relief in the Sooners’ 13-8 win over the Aggies on Friday. He was tagged for four runs.

The purpose of that appearance was to prepare Sandlin for the heightened atmosphere. It turned out to be a good plan. Sandlin said he had tried too hard in his brief appearance and took a different approach Wednesday.

“I just trusted my preparation,” he said. “I feel like today was more muscle memory than anything else. Just going out there and he just executing, don’t think about things too much.”

Sandlin (9-4), who allowed five hits and walked one in his 100-pitch outing, effectively worked the outside half of the plate with a sharp slider and elevated fastball.

He struck out the first three batters he faced, five of the first eight and 10 of the first 20. He encountered trouble in the fourth inning when the first two batters reached base. He then fanned Troy Claunch, Brett Minnich and Jordan Thompson on 12 pitches.

The Aggies beat Texas and Notre Dame to reach the bracket final. But they couldn’t score against Sandlin until Dylan Rock homered to left center leading off the sixth.

Sandlin then retired the last six batters he faced and turned the game over to closer Trevin Michael to start the eighth.

The Sooners led 3-0 in the first on Crooks’ fourth of the NCAA tournament, and ninth of the season, and added single runs in the third and fifth. OU has not trailed in its MCWS games.