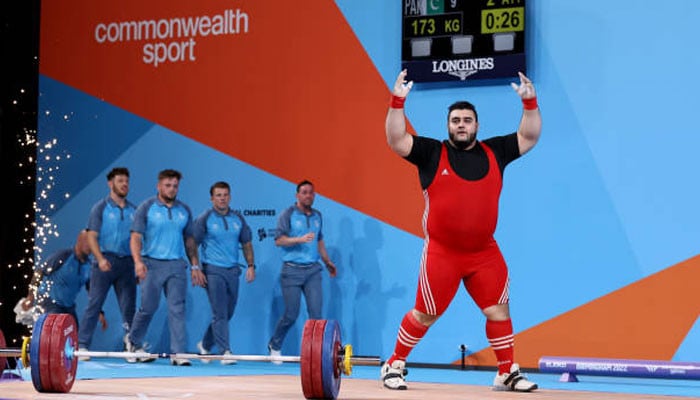 KARACHI: It was a joyous moment for Pakistan late Wednesday. Pakistani weightlifter Nooh Dastagir Butt has bagged the first gold medal for the country in the ongoing Commonwealth Games in Birmingham.

Pakistanis celebrated the maiden gold by pouring out on social media and lavishing praise on the 24-year-old Pakistani athlete, soon after the Gujranwala-hailed weightlifter claimed his record lift.

Butt won the first gold medal for Pakistan in the ongoing CW games in Birmingham by lifting a total of 405 kilograms – 173 kg in snatch and 232 kg in clean and jerk. It is a CWG record. Butt also bagged bronze in the last games held in 2018. He also won silver for Pakistan last year in December.

The official Twitter account of the Pakistan Cricket Board shared his photographs and called him a champion, wishing him more successes in the future.

The Twitter handle of the Quetta Gladiators and the Pakistan Olympic Association also extended felicitations to the athlete.

Nooh Dastagir Butt has set a new Commonwealth Games record by lifting 173kg in snatch in the 109+kg category. Butt also set another record by lifting 232kg in clean and jerk. Overall, he lifted 405kg – another CWG record.

Earlier, In the 2018 Commonwealth Games, Butt had got a bronze medal in the 105+kg category.