Nicola Spirig, one of the greatest triathletes of all time, is preparing to retire from the ‘intense emotions’ of her racing career 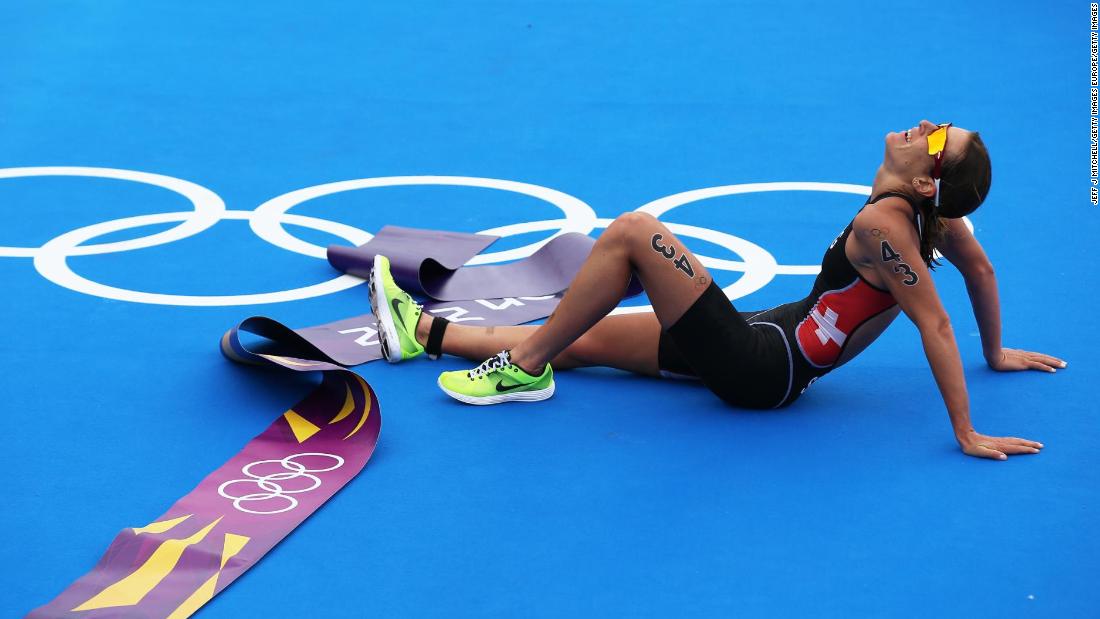 Old habits might die hard, but the 40-year-old Spirig knows now is the time for change.

She has three children aged nine, five, and three, and is looking forward to more family time and a break from her all-consuming training schedule.

Her new routine, she says, will likely involve an hour of exercise each morning, rather than the three daily sessions of swimming, cycling, and running she has become used to.

“Being a professional athlete also means that I have to train every day,” says Spirig. “There are no weekends, there are no holidays, I am always training … always ready to go hard.”

If the start of her final season is anything to go by, then Spirig, a two-time Olympic medalist and six-time European champion, won’t be ending her professional triathlon career quietly.

Earlier this year, a serious bike accident threatened to derail her season as she suffered three broken ribs, a fractured collarbone, and a punctured lung.

That occurred months before Spirig was scheduled to take part in the Phoenix Sub8 project, a team-backed challenge in which two women — Spirig and British triathlete Katrina Matthews — attempted to complete a full-distance triathlon — 2.4-mile swim, 112-mile bike, 26.2-mile run — in under eight hours for the first time.

Remarkably, despite the injuries sustained in the bike crash, Spirig completed the challenge in seven hours, 34 minutes, and 19 seconds on June 5 at Germany’s Lausitzring race track, three minutes behind Matthews.

“The accident was in February … I was not allowed to breathe hard, which means I couldn’t train properly,” says Spirig.

“I was about 12 weeks short of the training I should have done, but still the last few weeks before the Sub8 project went really well and I could see how the fitness came, I could see how I got stronger and faster. And I would say I did 100% the best out of the situation.”

Unlike a usual triathlon, Spirig was accompanied by a team of 10 pacemakers for the Sub8 Project to create the conditions for a fast time — particularly on the bike.

The challenge, and the build up to it, forms part of Nicola’s Spirit — a short film released by Swiss sportswear brand On earlier this month offering insight into Spirig’s long, decorated career in triathlon.

The Swiss star first took up the sport aged 10 and went on to compete at more Olympics — five — than any other triathlete, winning gold at London 2012 and silver at Rio 2016. This was at a time when triathlon was a relatively new sport in the Olympic program having made its debut in 2000.

“I was a pretty good junior and I was beating some of the Swiss athletes going to the Olympics in Sydney (in 2000), so I thought it could probably be possible to go to the Olympics the next time,” says Spirig.

“That was when my personal Olympic dream really started. But to go five times and actually to become an Olympic champion and winning another medal was never in my head like that.

But even now Spirig is at the end of her career having competed in more than 120 World Triathlon events, her love for the sport still burns as brightly as it has ever done.

“The most important is the passion for it — I still love it,” she says.

“On the one hand, I love to train, to move, to be active; it just simply makes me feel good. And on the other hand, I like the challenges and the races and seeing where my limits are and how far I can go, how fast I can go.”

Beyond the medals and the podium finishes — of which there have been many — Spirig has taken life lessons from her career in triathlon — even drawing on her racing experience when she was training to become a lawyer.

“I had the final exams and everyone was so scared and had anxiety,” she recalls. “I just said, well, I had pressure before. I know how to deal with pressure because I have it all the time at races and I know how to work for a goal — how to be efficient, how to plan.

“It wasn’t training sessions, it was studying sessions. To me, it was so, in a way, easy because I had learned all this in sports and I could just apply it to my studies.”

Sports, she says, “help you deal with real problems in life.” But there have been times, too, when life has helped Spirig deal with her approach to sports.

That includes how her attitude to training changed after having children — a time when recoveries became nonexistent and sometimes amounted to playing with Lego, she jokes.

“After a bad session, for example, before having kids I was thinking about it for days and pondering in my mind why it was a bad session and what I could have done differently,” says Spirig.

“And now there’s just no time. I see that there’s so much more important things in life that it’s not worth being upset about a single bad training session.”

Spirig, whose husband, Reto Hug, is a former Swiss triathlete, says she would have been ready to retire from the sport following the birth of her first child in 2013 and her gold medal at the 2012 Olympics — a race that was decided by a dramatic photo finish.

After a sprint to the line between Spirig and Sweden’s Lisa Norden, both athletes were awarded the same finish time. Spirig, however, was later adjudged to have finished less than 15 centimeters in front of Norden as she claimed her first Olympic medal.

“The years after that were always just like another little present that I could enjoy but didn’t expect,” says Spirig. “I think that’s why I could enjoy it and also do it for so long — because I always looked at it as a plus and a little present … I just appreciated it.”

She isn’t exactly sure what her life will look like beyond this season. As well as spending more time with her family, Spirig wants to visit schools to inspire children to take up sports and is also busy lining up sponsorship commitments.

And while training will continue in a reduced capacity, later this year she will contemplate lining up for her final race as a professional triathlete.

“I will miss the races I think because of the emotions,” says Spirig. “Racing means you have really intense emotions. Even if it’s joy, it’s pleasure, or if it’s disappointment — it’s all intense.”

At this stage, though, there are no lingering doubts about her decision to retire, nor regrets about what she would have liked to achieve.

“There’s nothing I would have done completely different,” says Spirig. “I just feel it’s time. It’s time for change, it’s the right decision for the family and I’m happy with that.”