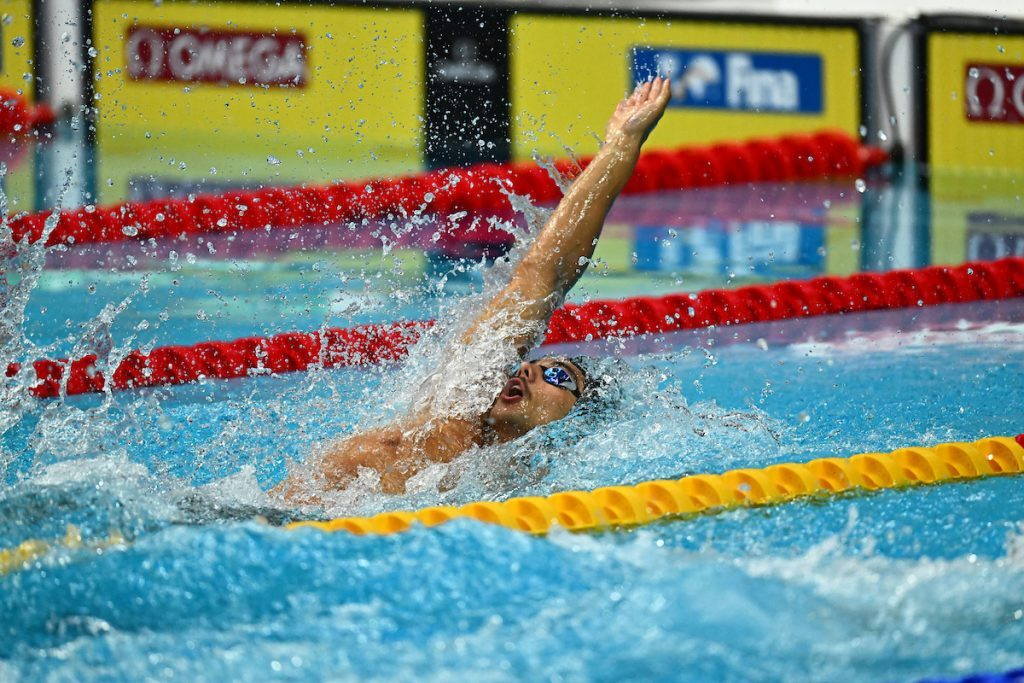 
Thomas Ceccon smashed a world record and compatriot Benedetta Pilato then continued Italy’s strong start to the Swimming World Championships as she won a second gold of the evening in Budapest on Monday.

Ceccon shaved a quarter of a second off the 100m backstroke world record as he won in 51.60sec.

“I didn’t expect this time,” Ceccon said. “I didnt expect to go so fast.”

Pilato was also delighted after she won the last final of the evening, the women’s 100m breaststroke, by a fingernail.

“I am super-happy and proud,” she said. “It was a dream which came true.”

Ceccon edged the old world record holder American Ryan Murphy, who set the mark, at the 2016 Olympics by 0.37sec. Another American, Hunter Armstrong was third.

“Today nobody could beat me! What a sensational time 51.6. It still has to sink in,” he said.

“It’s fantastic when you can break a world record in any sport, for me it is unbelievable. Maybe four athletes have done it in Italy, it’s an achievement that means a lot. Today the Americans went very fast.

“Today I’m not saying that I knew I was going to win but in my opinion I had no rivals. The two Russians were missing, it would have been an even greater challenge.”

In a sport in which most competitors obsessively shave body hair, Ceccon has drawn comments for his moustache. Asked if it was now a lucky charm, he shrugged.

Part of his bonus for setting a world record, the first of the championships, is a special Non-Fungible Token (NFT).

“I am very interested in NFTs and cryptocurrency, I love this stuff,” he said dutifully.

Ceccon, who is 21, was winning Italy’s second gold of the championships after Nicolo Martinenghi, 22, took the 100m breaststroke title the night before.

Just over an hour later, Italy’s new generation began to look old when Pilato won a third gold for the country.

Pilato was not only the second Italian to win on Monday, she was also the second 17-year-old gold medallist of the evening after Romanian David Popovici.

Yet Pilato had beaten Ceccon to a world record, setting the best time in the 50m breaststroke mark in the same Budapest pool a year ago.

“Before the race I was crying with joy for Thomas  who made me relive the sensations I felt when I set the world record and now here I am with gold around my neck. I am overjoyed and satisfied,” she said.

She added that she has matured since winning a silver at the worlds in Gwangju three years ago and missing the medals in Tokyo last year.

“I have also overcome the anxiety, and learned to take things calmly,” she said.

On a good day for Italy, Martinenghi was back in the pool and fastest in the breaststroke 50m semifinals in the evening.

In the morning, Gabriele Detti, who won the event when the championships were last in Budapest in 2017, qualified third for the men’s 800m freestyle final with Gregorio Paltrinieri fourth.