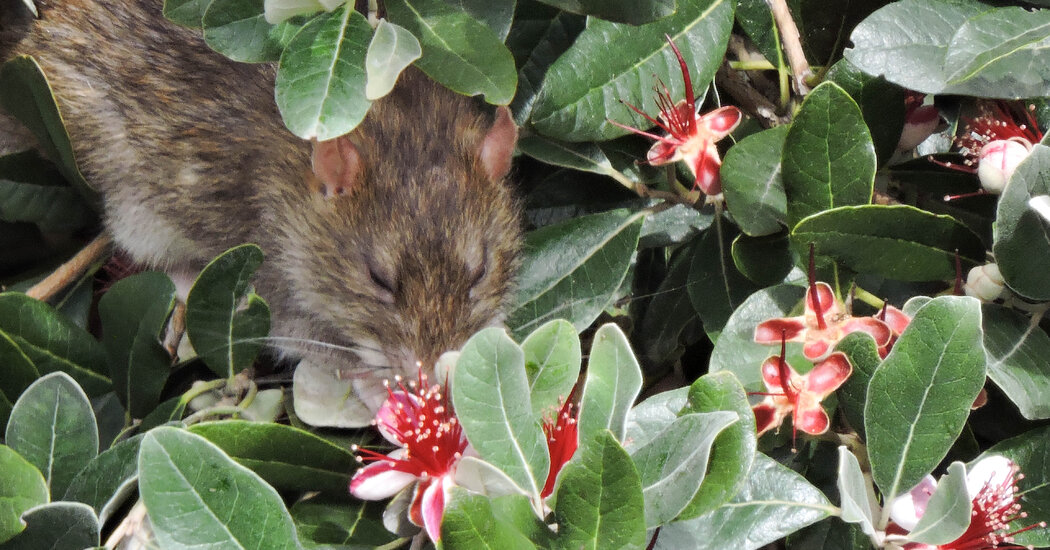 Birds do it. So do bees. Especially bees.

But common rats pollinating plants? In a study published in June in the journal Ecology, two researchers report that in Colombia, brown rats, the same ones that feast on garbage and steal slices of pizza in cities around the world, may be the primary pollinator in urban settings for the feijoa plant, which produces a fruit that is widely consumed in the country.

“I was very surprised because, in the beginning, I knew about the stories but never paid much attention,” said Carlos Matallana-Puerto, a plant biologist at the State University of Campinas in Brazil, whose remarks were translated by João Custódio Fernandes Cardoso, a co-author of the report. “Then when I started to study, I started to get excited because I started to realize that the thing makes sense.”

In Mr. Matallana-Puerto’s hometown Duitama, Colombia, residents — including his father and brother, and even the old lady living down the street — had long reported seeing typically nocturnal rats walking and perching in trees in broad daylight.

But when he started studying the science of pollination in college, the stories took on a new meaning: Could the rats have been pollinating the trees?

It was not a leap to wonder if rats could be pollinators. An estimated 343 species of mammals are pollinators. Bats — which some people call “mice with wings” — are well-known for pollinating bananas, avocados, mangoes, agave and durian. Elephant shrews, honey possums, lemurs and other rodents have also been spotted helping plants do their reproductive deeds.

To test his hypothesis, Mr. Matallana-Puerto did what any good naturalist would do: He watched and observed that the rats were attracted to feijoa plants. They produce a sweet fruit that tastes like a mix of pineapple and guava.

From the vantage point of his bedroom terrace, in the same neighborhood his grandmother once lived, Mr. Matallana-Puerto staked out 22 feijoa trees with a camera and binoculars to see what the rats and any other visitors did and whether they could potentially pollinate the plants.

From his bedroom window, Mr. Matallana-Puerto saw that the brown rat accounted for 88 percent of all animal visits to feijoa flowers. Birds visited just a handful of times during his 60 hours of observation.

If the rats are pollinating the feijoa plants, their behavior is a bit unusual. Most pollination by rodents occurs at night at ground level, on plants carrying strong scents and offering nectar as a reward.

In Colombia, the feijoa flowers are found in the tree canopy, without nectar or odor; instead, the rats feed on the petals and forage during the day when the flowers are open and fertile. This may be the first case of rat pollination where flower petals are the draw, according to the scientists.

“They are sweet,” Dr. Cardoso said of the petals.

Importantly, the rats do not appear to damage the reproductive parts of the flowers when they feast on the fleshy white petals. Instead, the rodents brush against the scores of scarlet stamens, which carry the pollen that could then cling to their fur coats until being transferred to another feijoa tree.

“It’s very unusual for a plant to have petals as the resource, and it’s pretty amazing that the rats figured out that they’re nutritious,” said Jeremy Midgley, an emeritus professor of biology at the University of Cape Town in South Africa who was not involved in the study.

However, Dr. Midgley had some reservations about the hypothesis.

While the research showed the rats visiting the plants, there was no information on how many of the flowers produced fruit as a result, he said. “It would be really nice if they’d have showed that rats actually do the trick.”

When Mr. Matallana-Puerto and Dr. Cardoso scoured the scientific literature, they found previous reports that the feijoa plant was pollinated by birds. The researchers hypothesize that in the city, rats may be more frequent guests because of reduced bird activity, highlighting how pollination systems may change with urbanization.

The tale of rats and feijoa meeting in the city — and potentially elsewhere — is an unlikely love story: Neither is native to Colombia.

The rats arrived from Europe, likely hundreds of years ago as a result of colonization; the feijoa trees spread northward from their native Argentina, Uruguay and Brazil.

“And these two met in Colombia,” said Dr. Cardoso. “So, they do not co-evolve. They don’t share a natural history. But they meet, and their morphology, physiology and behavior allows them to interact.”