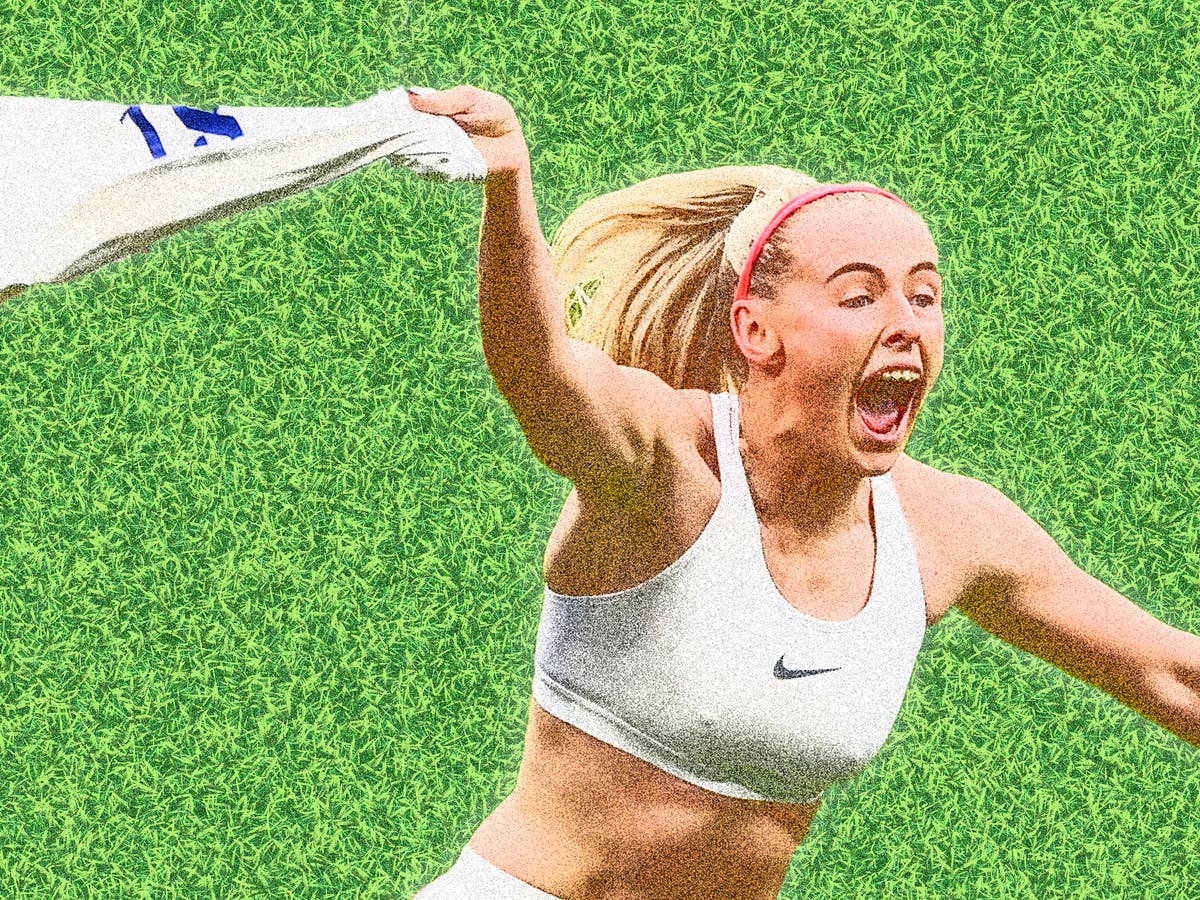 Even in moments of extraordinary professional triumph, it is generally unacceptable to remove one’s shirt in the workplace. No matter how thorough your most recent slide deck, no matter how elegant your last email, your shirt must stay on your torso rather than be waved above it as you wheel away in celebration.

The rule applies even on the football pitch, where shirtless celebrations are reserved for the moments of wildest abandon. Brandi Chastain did it in 1999 after scoring the USA’s winning penalty in the World Cup final. The moment was immortalised not only by what The New York Times called “the most iconic photograph ever taken of a female athlete”, but also by a statue cast 20 years later.

When Chloe Kelly scored England’s winning goal in last night’s European Championship final against Germany, she celebrated similarly. Ripping her shirt off in exultation, Kelly tore down the pitch in her sports bra. She was rewarded with history’s most joyless award of a yellow card. Then nationwide adoration. Lucy Ward, a writer, went viral on Twitter by commenting: “This image of a woman shirtless in a sports bra – hugely significant. This is a woman’s body – not for sex or show – just for the sheer joy of what she can do and the power and skill she has. Wonderful.”

Is it the exhibition of power and skill that makes the shirtless sprint the top-graded celebration in football? It holds the same status in the men’s game as the women’s, with the year 1999 an apparently vintage year for the practice. Like Chastain, Ryan Giggs tore his shirt off after scoring a legendary winner; unlike Chastain, he was not cast in bronze, perhaps owing to the difficulty of capturing the baroque rug of hair that festooned his chest.

As with stars of the shirtless summer of ’99, Kelly appeared to be doing what felt natural, give or take her brief pause when she waited for confirmation that the goal would not be ruled out. In examining why it might have felt natural, we can turn to the ethologist Desmond Morris and his rivetingly patronising book The Soccer Tribe.

The removal of the shirt, we learn from the book, seems to represent a bonfire of inhibitions, and in that bonfire we might recognise the traces of our ancestral past. Describing footballers’ goal celebrations, Morris writes: “With their supporters roaring, dancing and clapping on the terraces, the Tribal Heroes celebrate their ‘kill’ in a frenzied outburst of abandoned leaping and embracing. It is a peak moment of tribal life and it is enjoyed to the full, with all physical barriers down and all the usual inhibitions swept away.”

Philip Furley, an academic who has authored several papers on body language in football, points out that famous instances of post-goalscoring shirt-removal tend to occur when the goal has ended a period of extreme mental pressure. Kelly, for instance, had put her team back in front with minutes to go, vanquishing a German revival that had taken the game to extra time and might have wrested glory from England in front of home fans.

The players “have put so much work into it that when they achieve something like that,” Dr Furley tells me, “something falls off in a psychological sense. Maybe this is also an expression of relief.”

And having recovered this year from a career-threatening anterior cruciate ligament injury, Kelly might have felt an even more powerful sense of release in scoring the winner than her teammates might have.

Another common trigger for shirt removal, Dr Furley guesses, is the urge to show off one’s physique. Players occasionally deem a yellow card – the punishment that was prudishly enshrined in the global football rulebook in 2004 – as an acceptable penalty. “It’s showing how fit you are,” says Dr Furley, “that you’ve achieved something absolutely great.”

This urge to show off is more obvious in some footballers than others. Cristiano Ronaldo’s spin on the shirtless celebration, for instance, is running to the nearest camera in order to flex his naked muscles to as big an audience as possible. (He does this while shouting his catchphrase. Yet again, this is not one to imitate in a non-sporting workplace.)

A paper published in the journal PLOS ONE in 2020 puts it this way, getting Ronaldo bang to rights. Celebrations are context-dependent, the researchers wrote, but they “are also aimed at promoting personal and social motives, such as strengthening one’s personal elements by promoting bodily capital (eg, exposing a muscular body by taking off the jersey)”.

Behaviour like Ronaldo’s, one might delicately venture, may well be more common among men than women. “[It’s] still a bit more of a taboo in women’s sport,” says Dr Furley.

That probably goes some way toward explaining why Kelly’s celebration seemed to catch the public imagination. “Chloe Kelly giving us the supportive sports bra representation we NEED,” wrote another Twitter user.

A third, widely quoted, said: “Chloe Kelly celebrating her goal in her sports bra is the feminist image of the decade.”

The television and radio presenter Lauren Layfield, wrote: “I’ve calmed down now and I’m ready to write a detailed think piece about Chloe Kelly’s iconic sports bra celebration.” (Get in the queue.)

Kelly’s celebration showed a watching and perhaps unfamiliar public that the animalistic shirt-jettisoning they might have seen in the men’s game has as natural a place in the women’s game, irrespective of sports bras. It probably isn’t a coincidence that another of the game’s widely circulated tableaux involved Jill Scott, the veteran midfielder, shouting “F*** off, you f***ing prick!” at Germany’s Sydney Lohmann, who had brought her down. Riled up fans love riled up players.

Dr Furley, by the way, is affiliated to the German Sport University, in Cologne, but holds both British and German passports. “I was happy for the English team,” he claims.

It would be hard for anyone not to get a little second-hand happiness from watching Kelly’s elated celebration. It will be harder still to resist the urge to imitate her in five-a-side.