A 10-hour trek to a tiny Scottish island for lunch? Trust me, the food is worth it 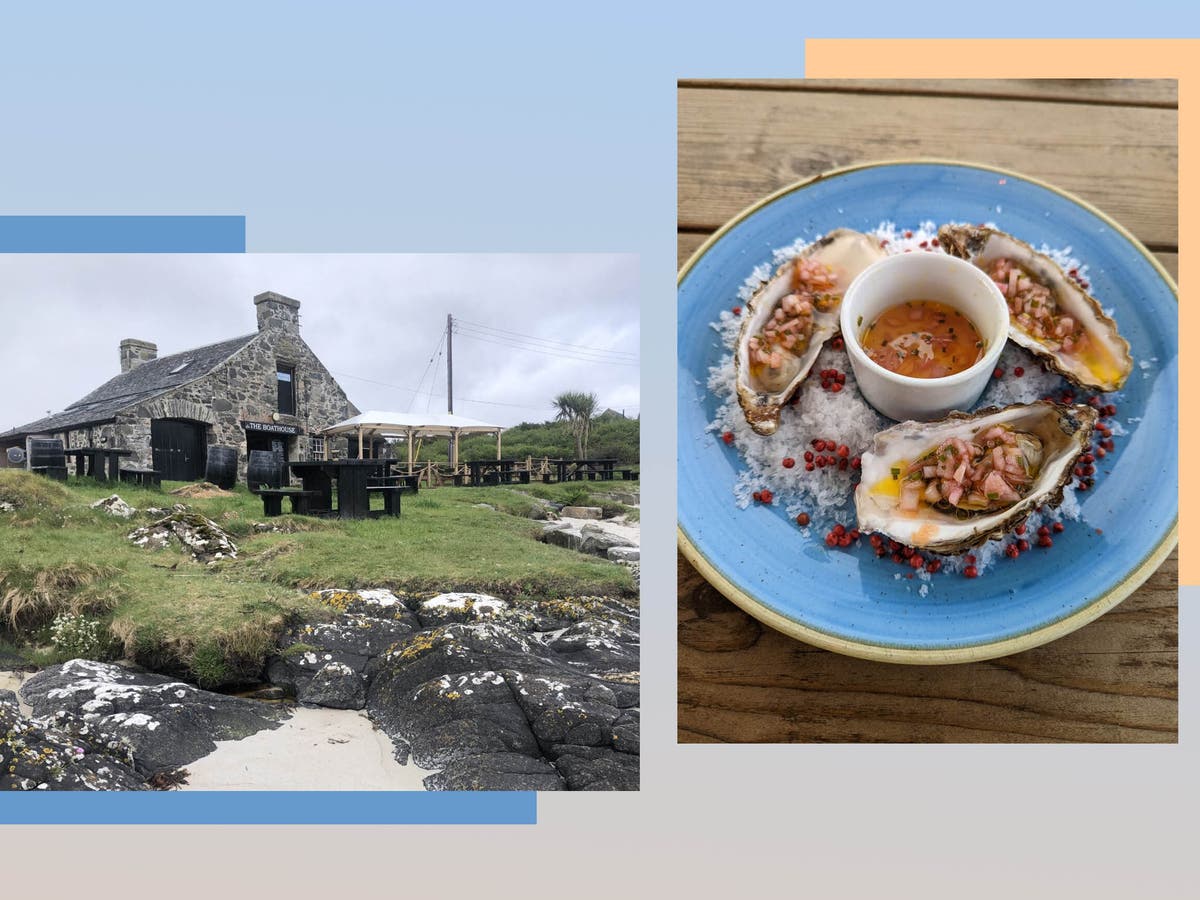 Usually, the harder the trek, the more rewarding the view when it comes to going on a hike. And the same can be said for finding a new restaurant.

Going from my flat in zone 2 in London into the centre of town can be a real trek in itself, especially if there’s a tube strike to contend with (which is becoming the norm during this summer of discontent), or if the dreaded rail replacement bus service rears its ugly and unwanted head on a Sunday. Or, if I give up and take the car, the congestion zone charge, ultra low emission zone charge and the endlessly confusing lanes and cameras just waiting to catch you will no doubt make it a nightmare. Don’t even talk to me about parking. If only I could master the art of teleportation – it would probably be easier and cheaper.

While I’m no stranger to winding down country lanes in Cornwall, where I grew up, to find a restaurant I’m hoping is worth the trip, having to do it by ferry – multiple ferries, in fact – is new to me. That’s where I found myself recently, on the west coast of Scotland, driving from one side of Loch Fyne to the tiny isle of Gigha. My first ferry took me from Portavadie to the fishing village of Tarbet, where brightly coloured school bag-clad children were being marched aboard by their suited and booted parents. I know rural: north Cornwall is rural. We call an hour’s drive “down the road”. But even to me, this is a real effort to travel for food.

The second ferry terminal is about a 30-minute drive to Tayinloan. From there, it’s a two-minute ferry to Gigha, which, if you work out how much you’re being charged per second, is enormously expensive (with a car). Thankfully, these much needed lifelines are heavily subsidised by the Scottish government.

It feels quite adventurous crossing two bodies of water just for lunch. Gigha is a special little place, with fewer than 200 inhabitants. The staff at The Boathouse tell me about a new family moving here who have eight children, which would double the population of the island’s single primary school. To go to secondary school, kids have to get a ferry to the mainland. While it is indeed small – just seven miles long – or perhaps because it is so small, there’s a huge sense of community spirit on Gigha. So much so, the inhabitants clubbed together and bought the island in 2002.

I had never actually intended to eat at The Boathouse. I had wanted to dine at hole-in-the-wall fish takeaway The Nook, next door to the Ardminsh Stores and the Post Office, but was disappointed to learn that their opening times hadn’t been updated on Facebook for quite a while and it was not open on the Wednesday we visited. Luckily, I had heard of another place to eat on this tiny, beautiful island. After a quick walk around the walled botanical Achamore Gardens, we got ourselves a table at The Boathouse, just a few metres from the water of Ardminish Bay. The sand is white and when the sun peaks through (you forget you’re in a waterproof over a puffer jacket in May) it looks like you’re in a remote part of Australia.

When I arrive, a coach-load of soggy older people – looking very forlorn – have just been turned away. We later see them still sitting on the bus, waiting for the ferry, tummies surely rumbling.

Inside is full, so we take the last table outside, which is slightly under cover on the fairly new looking deck area, and we’re hopeful that the heavens, for once, will stay closed. This is Scotland, after all. It’s busy, but we manage to convince the team to squeeze us in, and we have a drink while we wait for the kitchen to clear itself. Fyne Ales is on tap, which comes from the “nearby” (a ferry ride and over an hour’s drive away) family-run brewery at the top of Loch Fyne.

The Boathouse is the island’s oldest such building; around 300 years old. The menu is written in chalk on the front door, and specials run out as quickly as they come in. It’s split into starters, mains and oysters, with lobster and crab dishes too, which are caught using creel pots. So far, so good. But, after taking a closer look, the chefs are clearly inspired by Asian flavours in the form of broths, yuzu, katsu curry, kimchi and miso. They’re all pretty powerful flavours, and in the wrong kitchen could ruin seafood that’s so fresh it’s only come metres ashore to your plate. Here, though, it’s in safe hands thanks to owner Sam Berry, who took the reins over from his brother after the pandemic.

At the helm is Jordan Hespi, whose love of Asian food clearly shines through. We go for a mixture of small plates, not wanting to miss out on so many tempting dishes. We ask one of the young staff members for a recommendation: the togarashi fritto misto. Soft squid rings coated in togarashi, a Japanese spice mix made up of chilli, seaweed and sesame, is one of the most exciting ways I’ve had calamari in a while. It’s served with hot and sour pickles, and a dash of creamy yuzu aioli for dunking.

The meaty Thai green steamed mussels comes in a delicious warming pot of broth, topped with micro coriander, red chilli, spring onions and sesame seeds, giving heat, colour and crunch. It comes with a pleasing side of prawn crackers to soak up the remnants of the Thai sauce, which feels weirdly like eating Skips and soup, but in a sophisticated way.

Oysters, either three or five (why no sharing-friendly even numbers?) are sizable and incredibly moreish. I douse them in the mignonette – vinegar and shallots – giving them an extra sea-salty punch. They’re farmed less than a mile from the restaurant by Tony Walker and are, so far, my favourite oysters on the west coast.

Stepping away from the Asian inspiration, there’s also some classics; scallops almost charred on the outside with black pudding, fresh peas and a croquette of pork rib. These are full of rich and melt-in-the-mouth flavours, and delicately cooked meat that pulls apart with the slightest touch. Other mains include variations of gourmet-sounding burgers (think buffalo haddock), fish and chips and cullen skink.

The cooking is faultless. But it’s in the presentation and making innovation and tradition work alongisde one another – neither one feeling out of place nor an afterthought – that The Boathouse shines. Not all chefs or restauranteurs can pull it off. So, hats off.

Booking is essential: don’t be like that hungry coachload. I wish you good luck, dear reader, on your intrepid journey. I promise it’s worth it.