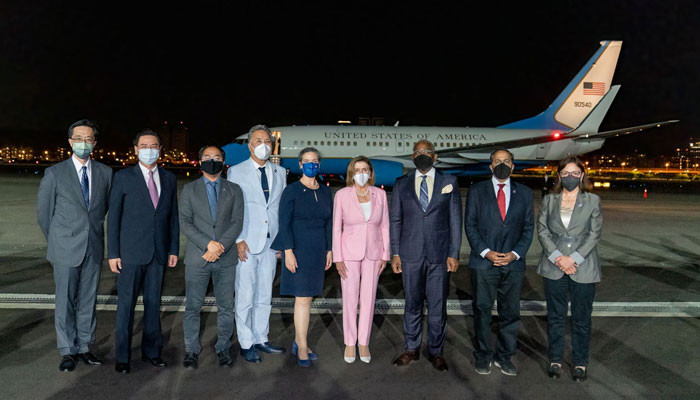 WASHINGTON: House of Representatives Speaker Nancy Pelosi arrived in Taiwan on Tuesday with a clear message for China, saying the US commitment to a democratic Taiwan is more important than ever.

In a visit that drew immediate condemnation from Beijing, Pelosi became the first official visit to Taiwan by a speaker of the House in 25 years.

She added that the visit by her congressional delegation, which includes an overnight stay, was completely in line with longstanding US policy on Taiwan.

Discussions with Taiwanese leadership will focus on shared interests including advancing a free and open Indo-Pacific, Pelosi said.

“America’s solidarity with the 23 million people of Taiwan is more important today than ever, as the world faces a choice between autocracy and democracy,” Pelosi said in the statement, issued as China condemned her visit and said it would badly damage Sino-U.S. relations.

In a Washington Post opinion piece released shortly after she landed, Pelosi outlined her reasons for visiting, praising Taiwan’s commitment to democratic government while criticizing China as having dramatically increased tensions with Taiwan in recent years.

“In the face of the Chinese Communist Party’s (CCP) accelerating aggression, our congressional delegation’s visit should be seen as an unequivocal statement that America stands with Taiwan,” Pelosi wrote.