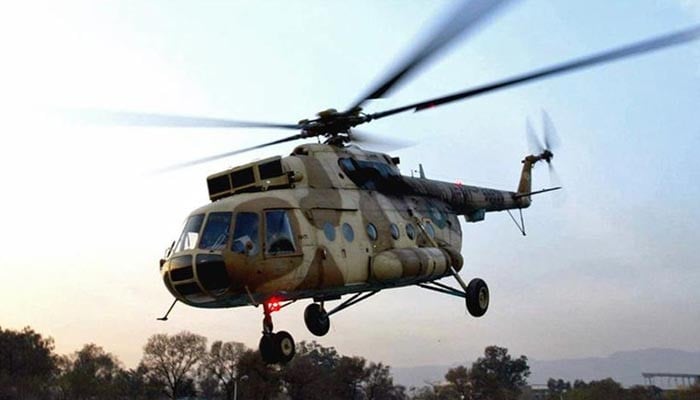 A Pakistan Army aviation helicopter en route from Quetta to Karachi with important personalities aboard has gone missing on Monday, the Inter-Services Public Relations (ISPR) confirmed in a tweet.

Taking to Twitter, the military’s media wing said that the aviation helicopter was on a flood relief operation in Lasbela, Balochistan when it lost contact with air traffic control (ATC).

“Six individuals were on board, including Commander 12 Corps who was supervising flood relief operations in Balochistan,” the tweet said, adding that a search operation is underway.

According to details available with Geo News, Corp Commander Quetta Lieutenant General Sarfaraz Ali, who was supervising the flood relief operations in the province, was also on board.

Per the details aired by Geo News, Major Syed was the pilot while Major Talha was the co-pilot of the helicopter. The Director-General of Coast Guards Brigadier Amjad, Engineer Brigadier Khalid, and chief naik Mudassir were also onboard.

The civil authorities and the Pakistan Army are currently busy with relief programmes in the province as the heavy rain spell has wreaked havoc there, claiming 147 lives.

Following the incident, the district administration said that a helicopter crashed in the vicinity of the Sassi Punnu Shrine, located near the Windar area, however, the ISPR is yet to confirm whether it was the same helicopter.

Local residents say that the helicopter was seen flying low after which it disappeared. Meanwhile, it was reported that the incident took place minutes before sunset (Maghrib prayers).

Deputy Inspector-General Khuzdar Pervez Imrani said that local police teams are also trying to find the helicopter. The area consists of mountain ranges which are creating difficulties in the search operation.

He further said that despite the difficulties caused by the terrain, police teams are trying to search the helicopter on motorcycles as well. A joint rescue operation of police and Frontier Corps has been underway for the last five hours.

Expressing concern over the disappearance of the helicopter, Prime Minister Shehbaz Sharif tweeted: “The disappearance of Army Aviation helicopter from Balochistan is alarming. The entire nation prays to Allah Almighty for the safety, security, and return of these sons of the country who came out to help the flood victims. Insha Allah.”

“Disturbing news of army aviation helicopter missing and praying for all those on board,” he tweeted.

President Dr Arif Alvi has also expressed deep concern over the disappearance of the helicopter and prayed for the safety of all those on board.