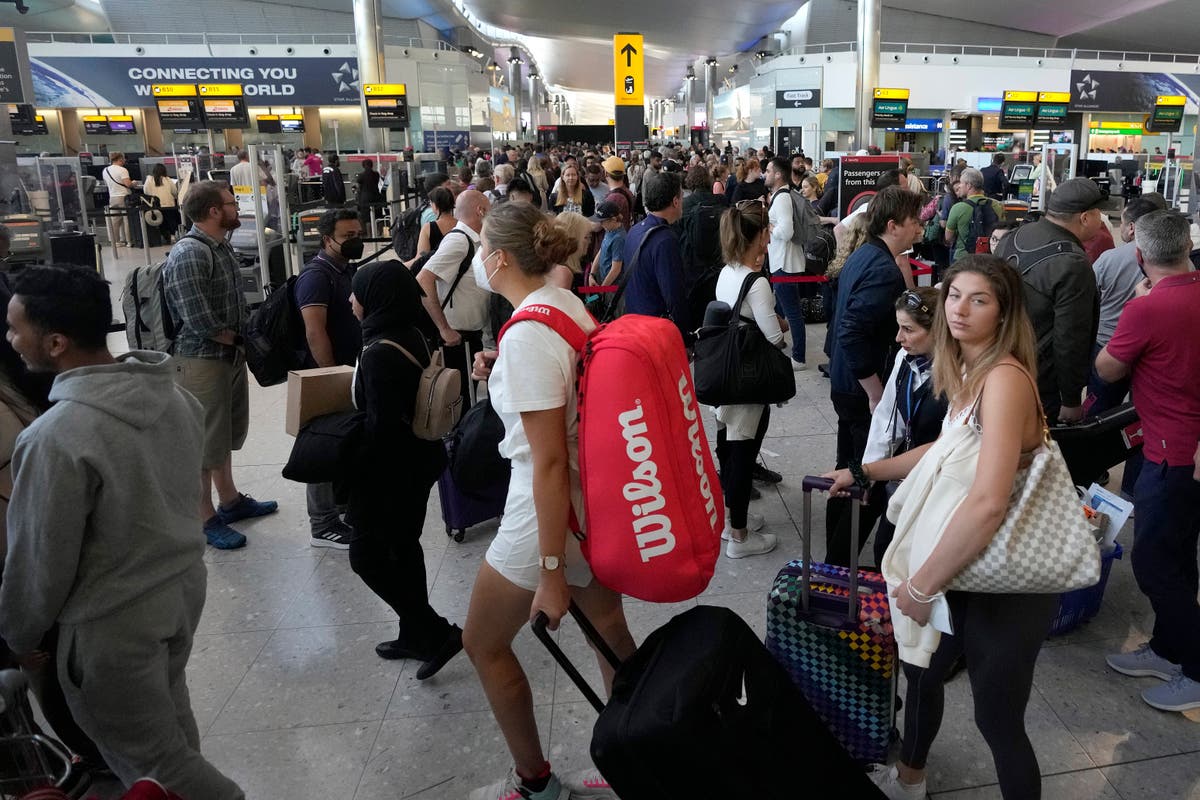 Britain is braced for a summer of “massive disruption” after British Airways workers voted in favour of strike action on the same day that railways were all but shut down by industrial action.

Ground staff at the carrier’s Heathrow hub overwhelmingly backed a walkout in their fight to reverse pay cuts imposed during the Covid pandemic.

Up to 1,000 workers will be involved in the strike, which the GMB union said was “likely to be during the peak summer holiday period”.

“Holidaymakers face massive disruption thanks to the pig-headedness of British Airways,” it said.

Downing Street said further strikes will “only add to the misery being faced by passengers at airports”. A spokesman promised “to look at what contingency measures BA could put in place” to get around the action.

It comes as passengers faced a second full day of strikes by transport workers, while Britain’s biggest education union, the National Education Union (NEU), and junior doctors have also warned they may pursue industrial action later this year or next if the government fails to meet demands for improved pay and conditions.

Ministers and business leaders are now weighing the potential fallout from a summer of discontent if workers across public and private services strike and win better pay offers.

The government is set to push through laws that allow companies to replace strikers’ labour with agency workers as soon as Monday. However, using casual labour to replace striking workers is unlikely to succeed except against the lowest-paid or less skilled workers.

The deepening cost of living crisis could provoke further industrial disputes in the coming months, said Yael Selfin, chief economist at accountancy firm KPMG. If this leads to higher pay offers it would “worry” policymakers who set interest rates at the central bank, she added.

“The risk of a recession has increased,” Ms Selfin said, adding that higher energy costs and supply chain disruption due to Russia’s war in Ukraine had piled pressure on UK households.

Strike action which triggers higher pay settlements “is going to worry the Bank of England” she said.

“It’s likely to increase costs and see interest rates going up further and faster. That would spell even deeper weakening, as higher interest rates slow the economy,” Ms Selfin said.

Rocketing prices of basic goods and services drove inflation to a fresh 40-year high of 9.1 per cent in the 12 months to May, according to official figures released this week.

Wages, meanwhile, grew at around 4 per cent in the three months to April.

The pain for households is set to worsen with the Bank of England estimating inflation could reach around 11 per cent later this year.

The Heathrow strike involves British Airways ground staff, predominantly low-paid women. Members of the GMB union voted, with 95 per cent in favour of a strike. The turnout was 80 per cent. Members of the Unite union in the same group of workers are also expected to vote for strike action.

Insiders have suggested that a first bout of strike action could take place as soon as the weekend of 9 and 10 July, coinciding with the first weekend of summer holidays for many schools in England.

“BA have tried to offer our members crumbs from the table in the form of a 10 per cent one-off bonus payment, but this doesn’t cut the mustard,” said Nadine Houghton, GMB national officer.

They are demanding that BA reinstates a 10 per cent cut taken from them during the pandemic. They claim “bosses pay has returned to pre-pandemic levels”, with Luis Gallego – chief executive for BA’s parent company IAG – in line for a £4.9m payout this year.

“Our members need to be reinstated the 10 per cent they had stolen from them last year with full back pay and the 10 per cent bonus which other colleagues have been paid,” said Ms Houghton.

“It’s not too late to save the summer holidays – other BA workers have had their pay cuts reversed,” she said, adding: “Do the same for ground and check-in staff and this industrial action can be nipped in the bud.”

Meanwhile, there was little sign of progress in the rail dispute.

“Our members are leading the way in standing up for all working people trying to get a pay rise and some job security,” said RMT general secretary Mick Lynch.

“In a modern economy workers need to be properly rewarded for their work, enjoy good conditions and have the peace of mind that their job will not be taken away from them.”

It was followed by an announcement that more railway workers are to vote on strikes, threatening fresh disruption in the industry.

The Transport Salaried Staffs Association (TSSA) served notice to ballot dozens of members at TransPennine Express (TPE) for strike action and action short of a strike in a dispute over pay, conditions and job security.

The ballot opens on 29 June and closes in mid-July, so the earliest that industrial action could be taken is 27 July.

A spokesperson for British Airways said: “We’re extremely disappointed with the result and that the unions have chosen to take this course of action.

“Despite the extremely challenging environment and losses of more than £4bn, we made an offer of a 10 per cent payment which was accepted by the majority of other colleagues.

“We are fully committed to work together to find a solution, because to deliver for our customers and rebuild our business we have to work as a team. We will of course keep our customers updated about what this means for them as the situation evolves.”

The Independent understands that the 10 per cent offered by BA was a one-off payment that would not be consolidated into basic pay.